Before I begin this topic, I need to clarify something about these two words.  Many think they are synonymous.  Indeed, they are very similar.  But, in truth, they are different.  Modern scholars say it depends upon the number of people (or groups) involved.  Envy involves two people.  Jealousy involves three.  Let me explain:  If somebody drives a nicer car than you do and that bothers you because you really should have a car like that too, you are being envious of that other person because you want what they have.  If your significant other starts hanging around that car and it’s driver and they start chatting it up and that really bothers you, now you have jealousy because that car and it’s driver are threatening your position with your significant other.  At first it was just you and the owner of the nice car (2 people).  But, now it is you, the owner of the car and your significant other (3 people).  Envy has grown into jealousy.

I chose this topic because envy and jealousy are closely related to fear which we recently finished and they are the cause of so many other problems.  Envy and jealousy have destroyed marriages, damaged relationships, caused fights, riots and is probably the cause of most murders.  So with that said, let’s get started and expose the truth about these things. 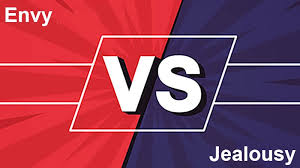 For starters, jealousy isn’t necessarily always bad or evil.  That doesn’t make it good or something to strive for, it just isn’t something that in and of itself is totally evil.  God himself describes himself this way “for I the Lord thy God am a jealous God” (Exodus 20:5).  In case you think this is just a fluke, he says it again in Exodus 34:14, Deuteronomy 4:24, Deuteronomy 5:9 and Deuteronomy 6:15. Joshua affirms this in Joshua 24:19 as does Nahum in Nahum 1:2.  If all jealousy were truly evil, then God would be declaring that he has an evil attribute.  We know this is not true because 1John 1: 5 says:

I John 1:5  This then is the message which we have heard of him, and declare unto you, that God is light, and in him is no darkness at all.

There is absolutely no darkness (evil) in him at all.  So, what are we to make of all this?

My friend, God has emotions just like you and I.  In fact, our emotions are modeled after his. We know this from the record in Genesis.

Gen 1:27  And God created man in His image; in the image of God He created him. He created them male and female.

We were made in his image… in His likeness and this includes our emotions.  Religion has done a great job of making people feel guilty for feeling just about any emotion.  Anger isn’t necessarily evil, but how many were taught that it was?  God certainly has gotten angry a time or two.  It’s okay for us to be angry.  We’re simply told in our anger, do not sin.  There are several attributes to our emotional or social design that can have a negative component or side effect.  Anger is one.  Our free will is another.  We can choose life or we can choose death.  We can choose to love other people or we can choose hatred and murder.  It’s our choice because it is our will.  Love is another aspect of our design that can also have a negative side.  More on that in a moment.  God’s love is pure and something that is holy.  The “negative” side of this is also pure.  So, initially we are going to talk about this from the standpoint of purity (from God) before we get into the darker or human aspects.

God loves you with an intense love.  Because of this love, he can be jealous (Exodus 20:5).  So, how can a loving God also be a jealous God?  It’s simple.  When you have a relationship with Him and then something else comes in and pulls your heart away from his, he becomes jealous because of His great love for you.  You are pulling away from him because of this third party or an idol in your life that is robbing him of your heart and he becomes jealous and highly protective of your time together.  So, in my opinion this form of jealousy is a byproduct (negative aspect) of love.  God’s love is pure and so also is his jealousy.  It isn’t tainted with sin.  We also can be jealous because our emotions are modeled after his. We are made in His image (Gen 1:27) and that includes our emotions.  The key is, what do we do with our jealousy.  In a marriage, if one partner is doing something that causes the other to be jealous, there should be some healthy dialogue and then the realization that this behavior is a boundary in the relationship.  As long as the one partner respects this boundary, then their spouse will feel safe and protected.  It is important to note that jealousy in a marriage does not always mean that someone of the opposite sex is involved.  It can mean social engagements, activities and even seemingly “godly” activities.  If whatever one partner is doing is robbing the other of relationship and causing anger and resentment, then you have a form of jealousy.  You have the two spouses and these other activities (making it 3) and one of the two is pulling away to do these other things and hurting their spouses heart in the process.  These activities (or relationships) may seem good and even godly.  But if it’s hurting the marriage or family relationship, then something is wrong.  Where things get confusing is if the spouse is unable to handle this is in a godly manner.  This is where Godly marriage counseling is required to sort it all out.  It all has to do with how the one reacts to their jealousy and if their partner is willing to listen and respect those boundaries.  An unhealed person may react with threats of violence and intense anger and in some cases their jealousy may be completely unfounded and sinful.  Left unchecked and unhealed and this person may make it onto the evening news because of their rage and anger.  Likewise, if the partner laughs at or scoffs at those boundaries, they are equally in sin in my opinion.   If your marriage is having any form of this kind of difficulty, then please seek professional help.  You owe it to yourself and your family.

There is much to discuss when it comes to God being a jealous God.  But, I’m not going to talk too much about this side of things.  Instead, we will be dealing with the negative aspects of human jealousy.  But, I wanted you to see that sometimes jealousy can serve a good purpose and perhaps even a godly purpose  if handled properly.  Let’s take a look at Jesus and John the Baptist for a moment.

John 3:22-36  After these things Jesus and His disciples came into the land of Judea. And He stayed there with them and baptized.   And John was also baptizing in Enon near Salim, because there was much water there. And they came and were baptized. For John had not yet been cast into prison. 25  Then a question from John’s disciples arose with the Jews about purification.  And they came to John and said to him, Rabbi, He who was with you beyond Jordan, to whom you bore witness, behold, He baptizes, and all come to Him!

And John answered and said, A man can receive nothing unless it is given to him from Heaven.  You yourselves bear witness to me that I said, I am not the Christ, but that I am sent before Him.  He who has the bride is the bridegroom, but the friend of the bridegroom who stands and hears him rejoices greatly because of the bridegroom’s voice. Then my joy is fulfilled.  He must increase, but I must decrease.  He who comes from above is above all; he who is from the earth is earthly and speaks from the earth. He who comes from Heaven is above all,  and what He has seen and heard, that He testifies, and no one receives His testimony.  He who has received His testimony has set his seal to this, that God is true.  For He whom God has sent speaks the Words of God, for God does not give the Spirit by measure. The Father loves the Son and has given all things into His hand.  He who believes on the Son has everlasting life, and he who does not believe the Son shall not see life, but the wrath of God abides upon him.

Look closely at verse 26;  And they came to John and said to him, Rabbi, He who was with you beyond Jordan, to whom you bore witness, behold, He baptizes, and all come to Him!

These are John’s disciples speaking.  They are upset that the people are flocking to Jesus.  Jesus is baptizing like John and everyone is going to Jesus.  This is threatening their position with the people.  Their sphere of influence is shrinking and that is really bothering them.   In short, they are jealous.  Now read John’s reaction to this:

This became a teachable moment for them.  I love what John said “He must increase, but I must decrease.”  Instead of succumbing to the jealousy, he defeated it right there.  He did so by vacating its primary function which is to protect and embellish self.  In this type of situation, there are really only two choices.  Love and prefer yourself over the other person or love and prefer the other person and promote their ministry over your own.  Jealousy simply can’t exist when someone has died to themselves and willingly promotes the other person.

I stated earlier that jealousy isn’t necessarily always evil or bad, although it certainly can be.  Envy on the other hand may seem harmless, but it tends to partner with  malice (desire to harm others or see others suffer) and/or strife (heated, often violent conflict or disagreement) and the results is never good.  Turn to James 3:16

James 3:16  For where envying and strife is, there is confusion and every evil work.

This passage pretty much says it all.  There is confusion and EVERY EVIL work. Notice it doesn’t say some evil works or a few evil works or even a lot of evil works.  It says EVERY evil work.  If it’s evil, then envy and/or jealousy  are probably involved in one way or another.  In the Greek, the word used is zēlos.

You are going to find these things:  confusion and every evil work.

To see how this works, you need to look no further than those super models of envy and jealousy, the Jewish leaders (and a few others also).

We will do exactly that and discuss this word zēlos and another Greek word in more detail next time.  Until then, may God’s richest blessings in Christ be yours today.